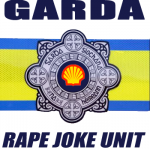 Development of the Corrib Gas field has been mired in controversy since it started. However, this morning an audio recording put up on Indymedia.ie (of Gardai joking about raping a female activist for not giving them her name) throws new light on how the project is policed. For many activists, this is simply a continuation of what they have come to expect, but for the general public who is so far removed from it, it will certainly cause concern.