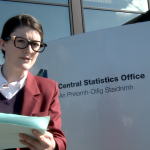 The census requires us to truthfully answer personal questions about our lives. As you will hopefully know by now, the CSO have being employing a company called CACI to work on our censuses since 2002. CACI have a sullied name due to their involvement in interrogation in Abu Ghraib prison in Iraq and have been accused of torture in 260 cases brought against them so far. They now claim immunity from questioning on these matters, granted to them by the US government, as they are considered part of the military chain of command.

What answers have the CSO got for the questions about this from members of the public?
We took a trip to their secure census premises in Swords, Co. Dublin to find out…